The Apple Festival: Festival of Regional Interest for Tourists

In the resolution 239 on 27th April 2011, the Tourism Vicecouncil of the Canarian Governtment gave this distinction to Valleseco for its Apple Festival.These celebrations are held in honour of la Virgen de la Encarnación at the beginning of October every year. To discover the origin of the Apple Festival it is necessary to return to 1974, when the municipal authority proposed that the contemporary priest organised a pilgrimage during the religious festivities in honour of the Virgin, where the neighbours could give thanks for a good harvest. Manuel Pérez Rodríguez describe this fact in his book “ Valleseco: el sendero de mis raíces” (2000, Imprenta Afra).

“And when October arrives the festival returns to the village, where the paths are already

covered with grass and the trees are full of apples …The Festival of Our Lady of La  Encarnación is arriving. The Festival of the patron saint of Valleseco. And, with it, the celebration of the harvest. Don Faustino Alonso, the village priest had the great idea of organising an offering by the local people. On the eve of the festival, they would offer their best fruit to the Virgin. With the passing of time this event has grown in popularity and has become a meeting place for the local people and their traditions. One of these traditions is the Apple Festival, the most characteristic fruit of Valleseco and there are many varieties, but the most popular is the “French” variety…

In the beginning, the pilgrimage consisted of a simple event: a group from the hamlet of 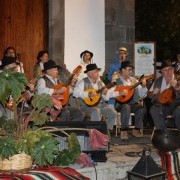 El Zumacal, dressed in traditional costumes, and came down the main street to the Church during the mass on the main day of the festival. They brought some bread and boxes of apples, which they laid at the feet of the Virgin. Next year, there were  two or three carts from the most popular neighbourhoods, accompanied by the famous folk group “Los Labradores de Valleseco”. On this occasion, the fruit was left at the entrance of the Church. In 1975, the ceremony was opened by D. Alfonso de Armas Ayala, literature lecture of the Pérez Galdós Highschool in Las Palmas de Gran Canaria. From 1976, these festivities have become more and more relevant and Town Hall asked all its neighbours to participate. As times goes by, this Festival has formed part of people’s lifes and developed into the celebration we know today.

The reason to choose this fruit as a leivmotiv for this festival is simple. Apples are the symbol of Valleseco. This tree was introduced in 1858 by the major D. Vicente Suárez Rodríguez, who decided to recover arid land by planting  fruit trees to avoid erosion. He asked the Civil Governor of the Province for a large quantity of trees to reforest this land. The variety of pippin apple variety was sent and planted and they spread it through Valleseco. Our climate and the humid Trade Winds have favoured the development of this crop. So many apples were produced they were even sold in markets.

Nowadays, Townhall of Valleseco has developed several projects around this fruit. They want this product to become a source of income and for that reason they are recovering and planting more apple trees and creating new industries. The transformation of pippin apples into jam, liquors and cider has increased considerably the value of the harvest and created new jobs. Moreover, these products are a new tourist attraction and people visit Valleseco to taste this new gastronomic delicatessen. 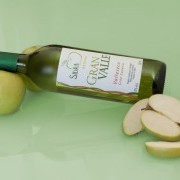 In 2009, Valleseco Town Hall started to elaborate the first cider produced in the Canary Islands registered under the name of Gran Valle. At the end of 2010, the first apples were pressed and fermented giving birth to the first bottles of cider. In 2011, it was distributed to restaurants, shops and tourist points around Valleseco.