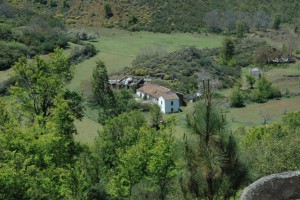 Leaving the most populated part of town, just a few kilometres from the Valleseco downtown, is the site of the Cortijo Calderetas which you can get to by walking a short distance from the off the main road. This beautiful landscape was formed by a large volcanic caldera which gave life to the surrounding chestnut, elm and pine trees. At it center sits a traditional Canarian house in the late nineteenth century. In a wide esplanade around the home grows the best food in the area: potatoes, cereals, and apples. At one side of Los Lavaderos de Calderetas with its characteristic tiles for washing clothes. Its historical origins dating back to the conquest of the island, like the other estates in the area such as: Cueva Corcho, Crespo, Almaderos, tables Galaz.

View with delight huge expanses of pine and chestnut trees which were reforested  that once were only vacant land or pastures. Sometimes you can see sheep and lambs perched on the slopes, and nearby will be their shepard who still lives in the area. Way off in the distance, if the sea of clouds allows, you can see a splendid panorama of the capital Las Palmas de Gran Canaria.

Near Montañón Negro, the landscape becomes rough and dry, revealing its recent volcanic origin. With a height of 1500 meters, it rises in the southern limit of the township, and runs along Barranquilla del Maipo, a tributary of the Barranco de la Virgen. Because of its unique geological features it has been declared a Natural Monument, and belong to the network of protected natural areas of the Canary Islands.