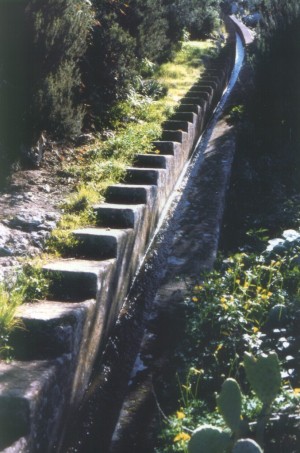 Water is one of the main resources of Valleseco. For this reason you find several irrigation canals for the transport of water, as well as dams and irrigation canals. The most important are the Acequia de La Cumbre, La Acequia de Crespo, and la Acequia Honda (acequia = irrigation canal). Many projects were constructed so that the population could take advantage of our abundance water. These water resources became community gathering poinits were neighors would come together and work. Los lavaderos were made of stone and the people could wash their clothing and take away jugs of water for personal use. Nowadays, town's women still regularly use los lavadores. Not so with the old mills that had spread along the Acequia Honda, belonging to the la Heredad de Aguas de Arucas Firgas, of which only a few traces of use exist.

Of special interes is the Etnographic Ensemble of El Molinete. In the past, two mills were located here, El Molinete and the Molino de Abajo, built at the end of the 19th century. They moved with the force of the waters that flowed down the Acequia Honda, collected from the Barranco de la Virgen and taken to Arucas and Firgas. Today, you can still see the canal and the steps where the "acequiero" used to go up to check the condition of the canal and, in front of it, the house of the Molinete mill, recently restored, and the circular construction of the cube. Then there is the laundry room and, at the end of it, the other cube belonging to the Molino de Abajo, which was located below. Google Maps

Other important ethnographic buildings are the Hermitage of San Luis Gonzaga in the neighbourhood of Valsendero and the Hermitage of la Virgen de la Silla in Caserón. In this area there are many examples of old Canarian houses. One of them is this hermitage dating from the mid-nineteenth century. It belongs to the Rodríguez Pérez family, which is known as the family iof the priests, because there were several priests in it. Hence, there is an small chapel where the residents of the place and the pilgrims who came along the royal road to pay their promises to the Virgen del Pino in Teror heard mass. Google Maps

Ethnographic routes: the route of water 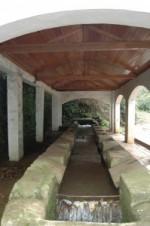 If you want to know the ethno- graphic elements related to the transport of water along channels in Valleseco, follow the Route of water